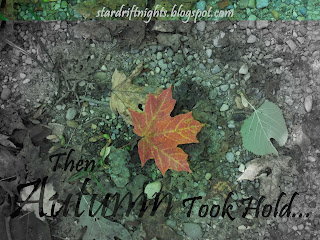 It always happens sometime around the end of August. I’ll be standing in the sun, smelling the new-mown grass, the sunscreen and the corn pollen and then suddenly…I recognize something in the slant of the sunlight. And in the middle of the close summer heat, something deep inside me whispers, “Oh boy, here it comes.”


And the mercury rises and falls and rises again, but there’s no stopping it. Fall is coming. For me, it’s one of the things that makes the merry-go-round of the year all worth it.


So, the equinox was on Monday. Specifically, it was at 3:50 am Eastern Daylight Time. That means the sun crossed the celestial equator and day and night were of equal length. Closer to home, it means my favorite season is officially underway, the leaves are allowed to start changing now, the air should get cool and crisp and start to smell like woodsmoke and spices and wet forest floor. And suddenly I feel like I’m ready to take on the world.


I don’t know the science behind that last seasonal change, but I don’t seem to be alone in the sentiment. Fall seems to be a favorite among creative types, particularly. I’ve got all kinds of plans to look forward to. Here’s an abbreviated to-do list:


·         Finish writing Nightstare. This might be my NaNoWriMo goal.


That’s just for my writing-life. I have other goals too. Like restarting the exercise regimen I dropped for no reason in June, and focusing more on my art, and my woodburning, and finishing recording that Irish tin-whistle CD, and planting bulbs, and GOING ON VACATION. It all sounds fun to me.


I sincerely hope everyone reading this is looking forward to Fall as much as I am. Set some exciting goals for yourself today and get to work on them. And then go outside and look around for the magical thing that’s starting to happen out there.
Posted by A.L. Buehrer at 9:28 AM No comments:


Don’t underestimate the power of this genre group. You probably do. I did. I have to admit that even though I am a diehard speculative lover not to mention an almost strictly speculative author, I only recently realized why it was so important.


Fantasy, science fiction, and futuristic genres are still somewhat neglected in the Christian market. The vast majority of modern Christian fiction still falls under “women’s fiction.” I feel like I probably rant about this all the time, so I won’t go into it again. All I’m going to say is that God created us with vast imaginative powers, and they were never meant to be limited to creating the love-interests of our dreams and stopping there. We’re made for so much more.


I don’t think it’s any accident that some of the most powerful and popular books and series of all time have been speculative fiction. The stories that draw masses of people tend to be the ones that expand our world to new horizons. Star Wars, Lord of the Rings, Star Trek, Harry Potter, The Chronicles of Narnia…there is a reason those fandoms are huge. People are magnetized by the idea of worlds beyond what we know.


I think there may be a little resistance in some Christian writers and readers toward getting too creative with our fictional worlds. This is natural. It can be uncomfortable mixing the deepest truth in the universe with our own imagined realities. And yes, this is a unique challenge of Christian speculative fiction. But it certainly isn’t an insurmountable one. It is possible to create an entirely different world from what we know that doesn’t contradict any element of truth. But it takes and author with God-given wisdom and creative stamina to accomplish it.


If you think you’ve got what it takes, maybe you’d better start writing. Because Christian spec-fic is important. Here’s why:


Society has a lot of lies it’s really fond of, if you haven’t noticed. Once of these is the idea that God is small. They want to make him like all the other gods. One of many. There’s one here, one there, a different one on this island, another in that village. But the Judeo-Christian God was never and is not a local deity. They also keep saying that we’re going to grow out of him. They’ve been asserting that for a rather long time. But he’s not a god of the past. No matter how drastically the world evolves—flying cars, laser weapons, interstellar travel, nuclear war, come what may—he’ll still be the same God as he was when he hovered over the waters.


So, what does this have to do with spec-fic? Everything. This is the underlying implication in all Christian speculative fiction. You may be in a galaxy far, far away. He’d be there, and he’d be the same. You could be in another world, where reality only vaguely paralleled ours, where society was unrecognizable, where fantastic beasts roamed free under any number of moons or suns and the truth of Christianity would still be the truth. Everything can change, but God remains the same. He has no reason to adapt.


Society thinks surely if the world as we knew it was turned upside-down, the illusion of Christian truth would dissolve. But looking at history, we know better. Our God is not just god of the mountain, or god of the temple—he’s god of the universe. He’s God of all possibility. If there turned out to be a multiverse, he’d be God of that, too.


And that’s what we, as Christian speculative writers, acknowledge. So, use that fantastic imagination of yours. Explore the far reaches of possibility. God is not small and truth is not fragile. Your sweeping speculative epics can proclaim just that. That’s the amazing mission of Christian speculative fiction.
Posted by A.L. Buehrer at 9:19 AM No comments: