Writing for Christ: Including the Gospel 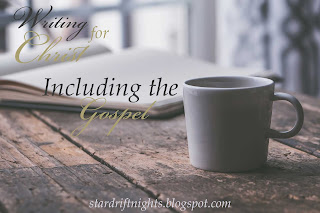 We now continue with our series on writing Christian fiction. Welcome back. I hope you got something out of the first post. This post is about how and when to insert the whole Gospel into a story. As we’ll see, there’s a right and a wrong way to do it, and there are times when it isn’t even the best thing for your book.


I think there’s some debate about the role of Christian authors. Actually, there’s some debate about the role of Christians, period. There’s a camp that seems to assume that the singular goal of everything a Christian does is to win souls. Evangelism is the ultimate calling for everyone. I don’t want to stomp on anyone’s toes but I would like to suggest that this might not actually be the case.


Hear me out. Evangelism is extremely important and I do believe everyone should live a life that points to God and be ready to evangelize should the opportunity arise, but that isn’t our only calling as Christians and certainly not as Christian authors. I think our calling can be identified more accurately than that, with more general and less constricting terms.


I think we’re called to glorify God through our art.


But how be we do this without turning a story and a work of nuanced art into a cheap throwaway tract, boring to Christians and meaningless to non-Christians? It’s all about putting the story first.


·         Have a character demonstrate the love of God. God is love. Honestly, one of the best ways to have Christ show up in your story is to let him shine through a character’s actions. Rather than forcing a character to tell another character that God loves them, have that character, driven by the love of God inside them, actively demonstrate that love to them. (Preferably in a way that moves the story.) Remember, action speaks a lot louder than dialogue, particularly in fiction.


·         Have a character do something that makes no sense without the hope of the Gospel. People who have the Gospel written on their souls are going to behave differently. They are willing to sacrifice in order to let God’s truth show through them. You can use a character’s decisions as an illustration of the Gospel message. But resist the urge to spend much time preaching about it after the fact. Your readers aren’t stupid. They can piece it together themselves. Trust them to see if they have eyes to see.


·         Have a character tell their own story as a testimony. Okay, Bad Kid is doing Bad Things and is headed down a Bad Road. Enter Wise Older Fellow Who’s Been There stage right. Wise Older Fellow Who’s Been There grabs Bad Kid’s collar. “Now, Sonny, let me tell you a little story about me when I was your age.” Okay, STOP. Not that way. It’s cliché and painful to read. You’re preaching directly at the reader at this point, whether you mean to or not. Instead, incorporate the other character’s past, not as a sermonette, but a bit at a time, illustrating your theme and developing this Wise Older Fellow at the same time. Let the testimony come as a biproduct.


·         Use the suffering of one character to bring light to the other. Don’t be afraid to let a character represent Christ in a way that’s this explicit. They don’t have to be Aslan or any literal Christ figure to do it. Sacrifice for love and truth is a very compelling plot device and can tell the Gospel story in a much more memorable and high-impact way than some character sitting down with another character over coffee and spelling the whole thing out in words.


·         Use the plan of salvation, but have the character only come to accept it gradually. If you really feel led to do the whole Romans Road thing word-for-word in the middle of your story somewhere, okay. But realize that you have effectively stopped the action and are interrupting the flow of your story with what could amount to a commercial break trying to sell the reader Christianity. But maybe you have a character who would probably do it that way, and they are in a situation where they likely would. Alright then, but beware the flash conversion. Most people need a lot more than just hearing it said to turn their whole life around and start believing it.


Another ugly truth you might want to keep in mind while writing evangelistic fiction is this: honestly, non-Christian readers aren’t likely to give Christian fiction the time of day. There’s a good chance that if you write Christian fiction, the vast majority of your audience is already Christian.


This does not mean that your art can’t potentially change your reader’s life. If you dedicate your work to him, God will use it. And even if your novel isn’t what ultimately turns a non-believer into a believer, it still is a powerful thing. The world is full of Christians who feel alone, unseen, and discouraged. Writing Christian fiction is a great way to reach out to them and lift their spirits. Novel-writing might not be the best tool for evangelism, but it can be exactly the right one for many other things equally valuable to God’s work in the world.


So, I would ultimately advise you not to try to make your novel a 113,000-word evangelism tract. Don’t feel pressured to spell everything out word-for-word. Let the Bible do that. Instead, find ways to artistically deliver the Truth and tell a great story.


Think of some novels that really spoke to you, as a Christian. Why did you appreciate them so much? Did they present the whole Gospel? How?


Coming up next, we’ll talk about writing non-Christian characters. I think it’s easy to put too little thought into these characters, and damage our stories by botching them. So, keep your eyes open for the next post.
Posted by A.L. Buehrer at 12:28 PM

Email ThisBlogThis!Share to TwitterShare to FacebookShare to Pinterest
Labels: writing for Christ