Everything I Can Tell You About Lightwaste

Allow me to encourage you with the rather hollow words that the publication of Lightwaste is just around the corner.  But it really is. All I’ve got left to tackle is a formatting issue that I can’t seem to solve. Once I get over that last of about a million speed-bumps, you will have Dronefall Two.


But while I continue to wrestle with that, let me tell you everything you get to know about Lightwaste right now. First off, it does have a cover. 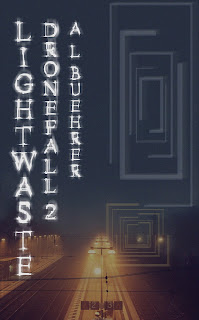 And a back-cover copy.


The strongest lies are invisible.


Halcyon Slavic wanted to disappear. That was why she ran away from society in the first place. She could slip under the radar, do what she believed was right, be whoever she wanted to be. In her smothered world, these simple desires all require some degree of anonymity.


Yet when she accidentally discovers that she has in fact, no legal identity on the world-wide database, something changes. Apparently, the facts of her own identity are being hidden, but why? In a fevered search for the answer, Halcyon leaves the shadows of District Three Point five and returns to the exposure and control of the world she was raised in—a world that dangles by a fragile string of well-told lies.


It’s a bit longer than book one, which will likely be the trend throughout the series. It’s also strongly Halcyon-centric, which has its pros and cons. First off, you learn some stuff about Halcyon, and hopefully get a chance to connect with her more than you did in book one. Halcyon can be a strange person to work with. She pushes and pulls a lot while I write. In this book she’s really trying to get her footing and decide what she’s willing to fight for. She knows how to keep her head down, which she’s done for most of her life, but she’s starting to question if its really possible, or even right to keep hiding.


Lightwaste is kind of a product of my college years, actually. I found myself confronted with some of the same kinds of opposition Halcyon faces in returning to her own school campus in search of records about her own identity. I think a lot of college-age Christians are going to recognize what they read here—and probably younger ones too.


The Advocates for Education and Social Development—which is a massive international organization that controls education and media in the Dronefall universe—is really the biggest influence on the society Halcyon lives in. She finds herself sort of accidentally taking on this cultural behemoth all by her lone in Lightwaste. And the fight is anything but fair.


So, the focus of Lightwaste is a little different from Dronefall. It’s going to feel a bit more political than the other books in the series—though I deliberately avoid the details of politics in the Dronefall Series in favor of underlying issues. But it sets the stage and really defines the opposition for the last three books and I expect is going to feel very real for people who have been paying attention to current events.


Also, you get Zoltan Sycora’s backstory. Can I tempt you with that? I thought maybe I could.


P.S.: In anticipation of Lightwaste’s release, book one, Dronefall, is only 99c on Kindle. If you haven’t started the series yet, and would like to, here’s your chance. Thanks for having the patience to read to the bottom of this post.
Posted by A.L. Buehrer at 3:11 PM No comments:

Email ThisBlogThis!Share to TwitterShare to FacebookShare to Pinterest
Labels: My Books


Well, I sort of went radio-silent after claiming that I was going to beat the odds and still hit my goal on November 30th. The reason? I was kind of busy doing it.


You need to see my stats to appreciate what happened in November. I have created a graph for you to observe. 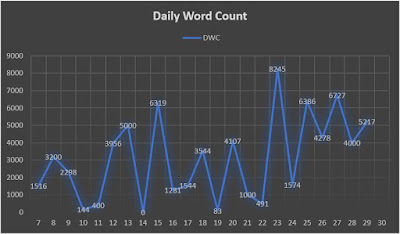 No, I’m not kidding. This is actually how I work. What you are observing is a numerical depiction of what it means to have energy-spikes. This really worried some of my professors in college.


This graph only spans from Day 7 forward. I got the brilliant idea of creating a word-count log in my writing notebook at that point, so that’s where we start. Yes, you are reading it right, I had a zero-word day on the 14th. My brain went on strike. I also had an 8,245-word day on the 23rd.  Not claiming that was particularly healthy, either, honestly.


I hit my 100k on day 39 of the proposed 40. My average word count per day was 2,982. But as you can see, I rarely did anything like that. Overall, I like to think I was pretty unstoppable, considering that I was way behind where I wanted to be until the last two days. I kind of decided not to worry and to just embrace my talent for uh…total inconsistancy.


In this way, Dronefall III was born. Book three is called Rainchill, for those who haven’t heard. There’s been a great deal of action and suspense and some big reveals. If you get through the first two books, you will hopefully be rewarded by this one. But you still haven’t gotten the chance to read Lightwaste.


That will be rectified soon enough. Hold on!
Posted by A.L. Buehrer at 12:22 PM No comments: