So, I thought it would only be fair to stop my insane last-week-of-NaNoWriMo writing and tell anyone within hearing some news from the wonderfully generous world of indie authors. There is a huge sale going on through Cyber Monday. There are over 150 clean indie books in a wide variety of genera on sale for as little as 99c or free. There are even some paperbacks available.
You could get yourself a pretty good lineup of reading material if you tried. I've watched a lot of these authors, and some of the books are on my own to-read list, even though I try really hard to keep my to-reads under control.
Anyway, check out the sale. And hurry up.

This is the link. You know you want to click it.
What's more, if that's not enough, there's also a crazy giveaway going on. A really crazy one. I mean a literally 20 paperbacks to the winner crazy one. Do I have to say more? You probably will be wanting the link to that one too, won't you. Okay. 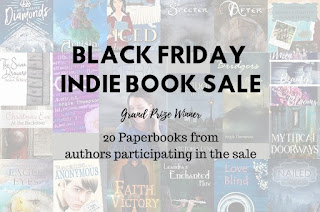 
I organized the 290 little circles in rows of ten. Each circle represents 100 words. Every 100 words, I plan to fill in one of the circles with a yellow colored pencil I have here with me. I’ve sectioned the rows off into 5 groups of 5 and 1 group of 4. The sections represent the six days I’ve given myself to catch up.


It almost looks possible. Especially with a cup of coconut almond bark tea—both of which will likely be gone before I’m finished writing this. I’m going to attack this thing. You probably won’t hear from me until Monday or later. I refuse to report until I’m caught up.


So, until then, good luck on whatever your own daring and dangerous adventures are this week. And I kind of hope you’re not as impractical and over-ambitious as some of us. I expected to do more tutorial and how-to post along the way here…but mainly I’ve been doing things wrong. So, here’s my tip for the day: don’t do things the way I do things.


Be back when I’m caught up. What, you don’t think I can do it? Let me show you something. Hold my tea.
Posted by A.L. Buehrer at 3:11 PM No comments:

Email ThisBlogThis!Share to TwitterShare to FacebookShare to Pinterest
Labels: 100k in 40d, NaNoWriMo


Well, I’m not sure that I calculated that quite right. I counted today’s minimum required word-count as missing. I have not yet begun to write! Not today. I just got off work.


The books is going very well. The plot moves very fast but there’s still time for jokes and stuff, which is important. This entry is going to be quite short, I think. I don’t have much to say here, but I definitely need to get back to the book.
Happy NaNoWriMo to all. If you want to “buddy” me on the official NaNo site, my user name is TheLaughingVulcan
Posted by A.L. Buehrer at 10:27 AM No comments: