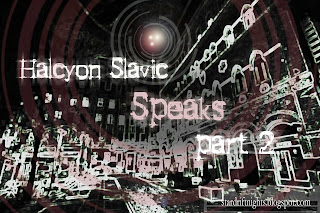 Welcome to part two of our interview with Halcyon Slavic, the main character of my most recent novel "Dronefall." In this interview we will get a glimpse of the story-world through her eyes. So, with no further introduction, we'll get back into it.
Exactly what is the role and function of the drone surveillance in your city?


Budapest has an enormous system of surveillance drones that persistently combs the city with cameras and tracking technology that lets them gather information from people’s phones and wearable devices. There’s a huge grid system that crisscrosses over most of the city, and I think that’s entirely owned by the police. Supposedly this massive amount of data-gathering is keeping a lot of crime off the streets that would otherwise be there. But of course, only a small percentage of the data relates to any crime whatsoever. All this information is always readily available to government officials, the police, and anybody who knows how to hack in and get it.


And how does the public feel about this?


I don’t really think they think much of anything about it on a day-to-day basis. Most people will scoff at you for raising an eyebrow about it. They argue that the system has saved—however many lives, it varies by who you talk to. They say it’s all actually very secure, and if you are bothered by police watching you, you must have something to hide.


Honestly, I think it bothers more people than are openly saying so. Nobody wants to look paranoid. You can get a lot of harassment if somebody says you’re afraid of the government. It looks pretty backward to some people.


You grew up in an Advocates for Education and Social Development school. Who is AESD, and what was your experience like?


AESD is an international machine that has more or less monopolized school systems in the west. They’re kind of their own government—though their funded by the actual governments of all the countries that they work in. I don’t even know how they started, but they were set up to reshape civilization according to a brilliant agenda that’s going to save us all from ourselves.


I’m starting to suspect one of their main goals is to extinguish Christianity in the next generation, but I know better than to say that. It would get me laughed off—loudly.


Just going on my experience though, the notion isn’t particularly laughable. I wouldn’t say the quality of my education was particularly good, but one thing they certainly did was start teaching children to be revolted by religion—and one religion in particular—at an early age. They used a lot of films and VR in teaching. And a lot of shock factor.


How would you describe attitudes toward Christianity among educators, students and the general public?


AESD teachers set themselves up as champions of acceptance. If you suggest that they have something against Christianity they will quickly deny it. And then they’ll go on to tell you what an oppressive, hateful, superstitious old religion it is and why it’s responsible for all society’s ills. To them, the thought of any rational moral person believing the bible is inconceivable.


Students are an odd lot. It’s hard to put them all in the same category. Most of them just follow along. They’ll believe or pretend to believe whatever they have to to get good marks and graduate. It’s a wonder any of them have opinions of their own by then. There’s so much opinion-sculpting that goes on in school. Some are just rebelling against their Christian parents—others might just be rebelling against their anti-Christian teachers. That’s how I started out.


There are still real Christians among the general public. But they tend to be bullied into silence by the rest. It’s definitely popular to have no respect at all for it. I’ve heard of a lot of people getting treated badly for voicing certain convictions, and when they reach out for more decent people to stop the unfairness, they are often met with silence. Decent people don’t want to look like they affirm Christianity.


What do you think it would take to change people’s minds about Christianity?


I have no idea. I don’t even know if it’s possible. They’d rather blatantly lie to themselves than consider it. At this point, all I want is to get away from them. They hate the one thing that’s important to me—the one thing that gives me hope and peace. I don’t know what we could ever do for them, now.
Posted by A.L. Buehrer at 4:22 PM