Showing posts from July, 2015
Show all

July 31, 2015
They only saw one planet on their way out of the ecliptic. Silita drifted far to the starboard side. Ahead, the stars stared blankly at them, saying quite clearly, “What are you doing here?”
Post a Comment
Read more 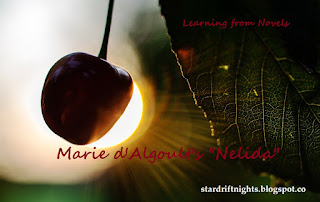 Nelida is a romance novel, published in 1846. So why in the world would I be reading it? Therein lies a story. I’m not just a writer, but also a classical music geek. My official celebrity crush is Franz Liszt, a Hungarian pianist/composer. If you are well-read in music history, you know that Liszt was not just famous for being an unprecedented piano virtuoso, but also one of the most scandalous figures of his time as far as his love-life went.   This novel was written by his mistress of ten years, the mother of his three children, around the time they finally broke up. It was a bestseller in its day, but probably not because it was a great book.   So, first, I’ll discuss the novel’s problems. One of the most glaring problems is the main character. Not a good problem to have. Nelida, is impossible for me to connect with. I’ll give you a quick run-down of the plot so you know. Nelida is a ridiculously sweet, ridiculously innocent girl who befriends, in her childhood, a gypsy
Post a Comment
Read more

Don't Do The Dress-Up Scene 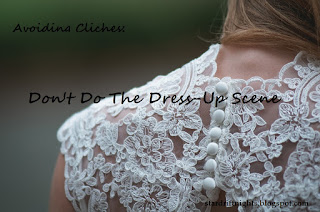 I might find this cliché less cliché, if I had at some point experienced something like it in real life. Maybe this actually happens among some people, but as far as I know, it mainly happens in dumb novels.   And even in some not-so-dumb novels. In fact, the example I’m thinking of is from none other than C.S. Lewis’s none other than Space Trilogy. In the third book, That Hideous Strength, there is a scene near the end where the ladies of the story are preparing for…a banquet, or something of the sort. (Frankly, That Hideous Plot really confused me.) They all are dressing up for the occasion in some fantastic clothes, which, though they would probably amaze me if I saw them, always fail to impress me when mentioned in this kind of context. There’s a lot of general oohing and ahhing—you know, like ladies do…about clothes.   Okay. So I’ve revealed that I’m not a girly girl. My point is, whether or not these things actually take place among more typical humans, how hard-hitting
Post a Comment
Read more

July 16, 2015
Rising out of Divizah’s murky atmosphere, dim lights mounted on the wings of some eerie unseen vessel could be seen off the Astronomer ’s starboard wing. The ship swiftly veered as the Astronomer turned back up toward the ring system for cover. Suddenly, it sprung from the atmospheric haze and charged after them. It was enormous, but very maneuverable, and it swept forward in the Astronomer’s pursuit with the form of a headless bird.
Post a Comment
Read more

July 13, 2015
From this point on, it’s only a six-week countdown until the Stardrift Trilogy will be available from Abbott Press’s website. That would date party time August 25. At last.   You know, I’ll probably post the whole story of my adventures in subsidy-publishing once they’re over. For now, I’ll just give you a teaser, saying, “It’s a once-in-a-lifetime experience.”   In the meanwhile, I’ve got one more thing. In these weeks counting down to printing and distribution, I’ll be posting snippets from the Trilogy here on As the Stars Drift interspersed along with my other posts. Stay tuned.
Post a Comment
Read more
More posts